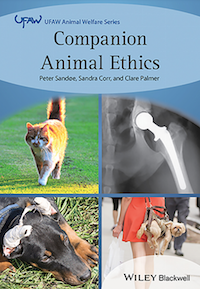 Companion animal ethics explores important ethical questions and problems that arise when humans keep animals as companions. This context raises unique questions, because unlike most forms of animal use, we can be so close to the animals that we mistake our needs for theirs.

The authors draw on a wide range of disciplines including history, psychology, ethical and political theory, and the veterinary, behavioural and social sciences to underpin their arguments. In addition, international experts are involved in co-authoring specific chapters to ensure that the book is supported by the latest scientific findings.

Many households in the industrialised Western world own companion animals. The American Veterinary Medical Association (AVMA, 2012) reported that just over a third of US households kept one or more dogs in 2011, and just under a third kept one or more cats (AVMA, 2012: p. 1). Figures are similar, though somewhat lower, in the European Union (EU) where, in 2010, just over 25% of households had at least one dog, and just under 25% had at least one cat, according to the European Pet Food Industry (FEDIAF, 2010). In most Western countries, the number of households keeping dogs and cats has been steadily growing for decades.

The AVMA (2012) also gives us information on people’s attitudes to the animals in their homes. Two-thirds of US dog owners see their dogs as members of the family; most of the rest, according to the survey, view them as ‘companions’ or ‘pets’. Over half the owners see cats as family members. For both species, the younger the owners, the more likely they are to view their animals as family members (AVMA, 2012: p. 14). According to a survey prepared for a pet food company in 2000, nearly half of American dog owners have taken their dog on vacation, and a similar number have celebrated their dog’s birthday (Ralston Purina, 2000). Thus the general trend is not only to allow dogs and cats into the family home but also – in these respects, at least – to treat them as members of the family.